So far, iOS 11 is maybe the buggiest release Apple has put out: it’s had eight updates to fix a bunch of issues, like the infamous A ⍰ bug, and while you’d think they’d have ironed most serious things out by now (11.2.1), I ran into two more, and verified them with Apple support on the phone.

I’m posting them here because I scoured the Internet for answers on them and got nowhere, which is why I resorted talking to Apple on the actual phone, and hopefully this will help you avoid doing the same thing. I’ll also update this post if and when they get fixed.

Bug the First: Edit and Share buttons are grayed out on some photos

This one is straightforward and super annoying and mind boggling: I can’t edit or share some small minority of photos. There seems to be no rhyme or reason as to which photos. The guy I talked to Apple couldn’t find the issue in their database, even though there’s at least one thread on it on discussions.apple.com (though it’s been erroneously closed).

Workaround: import the photo into an app that’ll let you re-save it. I used Camera+.

Bug the Second: On the first iCloud backup, you can’t choose what to (not) back up

Let’s say you have 5GB of Photos and you wanna do an iCloud backup of just the phone settings, because the photos are backed up already in some other way, and you got a new phone that you want to transfer your settings to. The settings themselves should be around 200MB.

Assuming you haven’t wasted money on iCloud and your limit is still 5GB, even if you have nothing in iCloud, when you turn on Backup it tells you there’s not enough space in iCloud, because it’s trying to upload your photos also. That’s it: you’re stuck. There is no way to get past this without buying more iCloud space.

In previous versions of iOS, you could switch off Photos, for instance, as well as iMessage and everything else, so you didn’t end up uploading the entire phone’s contents to the cloud. And you can still do this, on a backup-by-backup basis, but only — and this is the maddening part — if you already have a backup in iCloud.

Otherwise, there’s no way to control what goes up there or even see what the Next Backup Size will be. 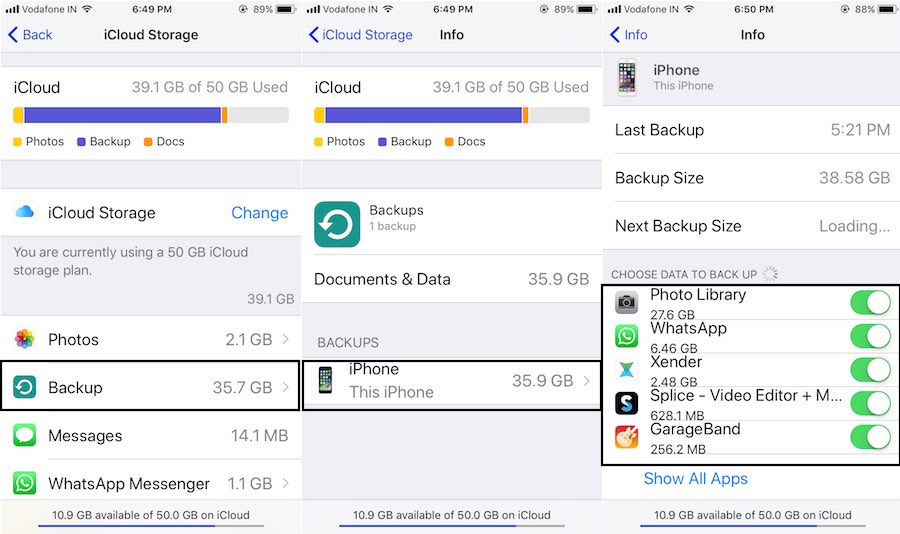 Choosing what to back up was so easy in iOS 10, and I was so incredulous that it wasn’t in iOS 11, that I went to the Apple Store so they could show me what pathway I was missing. After that went nowhere, I brought it up with the guy on the phone, and he confirmed this is how things are now.

There’s a StackExchange question out about this, but the problem seems to be too nuanced to have made it onto Apple’s radar.

Workaround: use an iTunes backup to restore the settings onto the new phone.

I’ll update this post if and when these things get fixed.